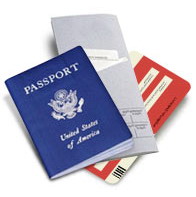 Note that visas cannot be obtained in the airport upon arrival.

For more details, please visit the website of the Ministry of Foreign Affairs of Ukraine.